women of a certain age are like sunflowers; they know how to turn their faces to the sun.

All things bright and beautiful,
All creatures great and small,
All things wise and wonderful:
The Lord God made them all.

He wasn't the biggest kitten in his litter. He wasn't the most playful. But when my youngest son brought him to me in his arms & told me, "I think this is the one, Mom." the kitten looked up at us & licked my son's cheek. I knew he was ours.

He was a small kitten, just a little smidgen of fur, so we named him Pippin, after the musical of the same name. It just seemed right for a little pip of a cat: diminutive, affectionate, adorable, just like its owner.

When he was young, my sons fought over who got to hold him, dropping the kitten onto the floor in the process. No one was the winner in that little altercation, but Pip was definitely the loser, coming away from  it with a green stick fracture in one of his hind legs. We rushed him to the vet, who put a splint on his tiny leg and reassured us it would heal clean.

It really wasn't funny but we had to laugh anyway, as the kitten ran in circles at first, due to the fact that he had two working legs on one side of his body and only one on the other. Soon enough however he got the hang of it, & ran all over the house, dragging his splint behind him like a fishtail waving through water.

He showed early on that he was a "people" cat. His favorite curl up spot was in the hood of my sweatshirt, riding around the house on my back as I did my daily chores. He always wanted to be where we were, a trait that defined him in later life.

Siamese cats are talky cats. They meow incessantly. Pippin was our fourth Siamese & easily the most voluble. From the moment we arose in the AM to the time we turned out the light, he was wherever we were, telling us he was hungry, he was thirsty, he was tired, he wanted us to sit down so he could curl up in our laps. There is actually a video on YouTube that  my brother-in-law put up when feeding him while we were away on a vacation. It begins & ends with Pippin standing on his hind legs at the screen door, meowing into the garage at whoever was coming and it doesn't let up in between either. He was a Chatty Cathy of a feline.

He spent many hours curled in my lap as I built Sunflower Designs. He was very well behaved, mostly leaving the yarn alone as I worked, but occasionally reminding me he was, after all, a cat. He just couldn't resist the temptation of the dangling needle cable in front of his face for one second longer. The only time he was a bad yarnie's kitty was when I left a small ball of fingering or lace-weight lying around overnight. Then I would awaken to an astonishing display of string art that wound throughout the entire house, upstairs & down, until it ended in a tail end or the cavernous reaches beneath the couch in the living room.

My mother spent prodigious amounts of money on her cats, including one that suffered from Feline Leukemia, sending him to Purdue's Veterinary School labs in the search for a cure. I did not understand. "It's just a cat." I said to my husband. I have had friends who mourned the passing of their animals for weeks & months & to a certain extent, years. "It's just a cat. " I thought to myself. We had to get rid of our oldest cat when our first child was born, as she peed on every surface of his belongings in protest. Although I cried, I reminded myself that, after all, she was "just a cat" and we had a baby to protect.

I will never use those words again.

Monday Pippin was alive. Yesterday he died. Today we buried him at the wood's edge, on our nine Michigan acres where he will remain with us always.

We did all we could but in the end it was not enough. The Vet thinks it was a brain tumor.

Pippin gave us everything he had to give. Unconditional love verging on adoration. He greeted us at the back door whenever we returned home. He followed us from room to room. He comforted me when I was upset, licking the tears off my cheeks. He waited patiently on the bath mat  in the mornings while my husband showered, nipping at his ankles or licking his feet when he got out.

On Sunday night he lay stretched out upon my husband's chest, his right paw curling around Scott's neck as Scott lay on the couch. Scott looked at me and sighed, "It doesn't get much better than this."

He seized on Monday night with no warning whatsoever. After a late night run to the emergency clinic, he returned home to us overnight. We wrapped him in a towel & placed him on the bed between us so we could both watch over him and love him. He seized again on Tuesday morning and never fully regained bodily control. I held his paw and stroked his neck as the vet administered his final injection. I can only hope in the end he knew he was loved by us as much as he loved us. 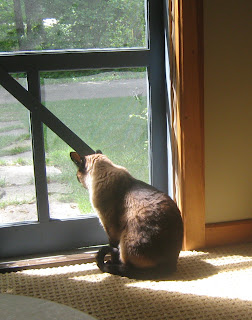 Pippin was so much more than "just a cat". He was family and we will miss him always.
Posted by Susan Pandorf at 9:28 PM

What a wonderful tribute. And I'm quite sure Pippin knew how loved he was, and he loved you guys right back.

I am so sorry for the loss of such a beautiful fur person. You wrote a beautiful tribute, making us all know him, too.

I'm so sorry. :( Your memories of him will keep him alive in your heart. It hurts so much to lose these very special members of our family.

Not "just a cat" but a true family member. I had one of those rare people cats and I miss her to this day.

They're never "just" cats. They are such important parts of our lives. *HUGS* Pippin sounds like he was a beautiful boy. I hope you find peace soon.

I am so sorry for your loss.

much hugs. I'm sorry for the loss of your friend Pippin. You'll be in my thoughts.

I'm so sorry for your loss. Your tribute was beautiful. I lost my Tiger this past winter and reading your words brought tears to my eyes. hugs to you and the family

Of course he knew. Staying with them until the very end is hard, but right for them. What a lovely post.

So very sorry for your loss. Pippin was a lucky guy, and he knew it.

((hugs))
So sorry your little boy is gone

I'm so sorry for the loss of Pippin. He sounds like he was a well loved member of your family. I know the pain you are feeling at his passing, having recently gone through this myself with my cat, Katy. I think Pippin is playing with my Katy, Sammy, and Tiffany on the other side of Rainbow Bridge. (Hugs) to you.

I am so very sorry about your lose of Pippin. What a beautiful tribute to him.

I lost a beloved cat just a week before you lost Pippin. You are right, they are never :just cats".

Every thread, however big or small, contribute to the fabric... cats included. I'm sure he felt the love around him from the moment you took him home, as you held him at the end and every moment in between... what a lovely life to have shared!

4 cabled patterns from the FotR series

4 lace patterns from the FotR Series

Fellowship of the Ring E-book $40

ALL PATTERNS ARE AVAILABLE ON THIS SIDEBAR. PLEASE SCROLL DOWN TO FIND.

Download link for PDF will be emailed to you. Hard copy available upon request for additional fee.

Susan Pandorf
Fishers, Indiana, United States
writer, knitter, designer, Quaker, mother of two, wife of one, seeker of enlightenment, child of God (not neccesarily in that order) I am a classically trained musician,who used to sing opera. Graduate of the WORD program in writing as ministry at Earlham School of Religion. I am 54 years young. My Ravelry name is pandosu

The Fellowship of The Ring

Fellowship of the Ring Collection (click image for details

There & Back Again Accessories

pattern not included in $45 FotR subscription - click image for details

Fellowship of the Ring Collection - click image for details

Fellowship of the Ring Collection - click on image for details

another light and lovely lace confection; click for details...

a lacy little bit of chinoiserie - click for details

for the rest of us - click on image for details

a rosy haze of a scarf to warm your heart . click for details...

Wear your heart on your sleeve... click for details

Exotic Beauty from the East

for the lovers, the dreamers, and YOU! - click pic for details

because spring can't get here soon enough...click on picture for details

Put a little sizzle in your summer! Click pic for details...